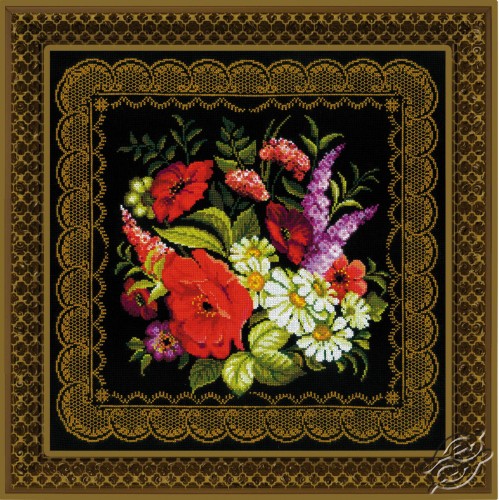 The kit contains fabric for the work, thread & thread sorter, a needle for embroidery, an instruction and a chart. The kit also includes a fabric for the back of the cushion.

The heritage of ancient painters   Black background, large bright flowers, a golden border along the edge. Many people can recognize a magnificent work by masters of the folk craft from Zhostovo village, situated near Moscow. Metal trays began to be paint at the end of the XVIII century, and the popularity of this work grew to the special kind of painting.   There are special rules in Zhostovo painting, which have been formed during centuries. Also craftsmen used their imagination for creating such items. Modern artists just like their predecessors, work according to patterns, and listening to the inner voice. The typical features of Zhostovo painting include not only flowers on a black background, but fruits, berries, birds, even lizards. Then the background turned red, blue or green. Bright and juicy stroke of paint-brush, large flowers, multi layers, traditional Russian coloring - Zhostovo painting is recognizable all over the world.   RIOLIS also opened up the heritage of artists on the canvas. We are pleased to present RIOLIS novelty 1642 Cushion/panel "Zhostovo painting" - especially for lovers of embroidery and folk crafts. Safil threads (26 colors) will help you to achieve traditional colors, and the flowers will blossom on the black canvas 14 Aida Zweigart. The embroidery kit also includes a cloth for the back of the pillow and a needle.   The artist Elena Kolmakova managed to get close to the masters of painting and recreate an exquisite bouquet on a traditional background. The choice - to hang a panel in a frame on the wall or make a cushion (which already happened in the embroidery kit 1600 Cushion/panel "Viennese lace") - always remains for the needlewoman. Related cross stitch patterns:
Flowers - On Black Fabric - Cushions
Related products