2015-05-27
The RIOLIS new kids height meter – for those who longs for everything bright and interesting and isn't afraid of the sky-high adventures!

The ancient city in the center of Italy at the slope of Monte Subasio keeps many secrets and traditions. Since ancient times people know about this place. In the Middle Ages, in the XIII century, the construction of a monastery in honor of St. Francis of Assisi began in the city. Famous artist Giotto decorated the walls inside the cathedral with his paintings. According to legend, after the end of construction, one nun copied his frescoes, simplifying plots with primitive lines. And then, in her simple drawings, they created an embroidery with the faces of saints. According to another version, St. Francis brought fabric with Arabic embroidery from the Crusade, and Italian craftswomen tried to repeat the oriental ornaments on the patterns.
By the way, the name of Assisi embroidery received several centuries later, when people decided to revive the skill of local embroidery.
The main feature of this type of embroidery is the use of stitches along the perimeter of the pattern. So while the background is filled with stitches, the pattern itself is obtained from a non-sewn space.
RIOLIS continues to acquaint needlewomen with various techniques. We offer you the needlework kit 1703 Sea Horse. Here, an exquisite turquoise color fills the background, and luxurious sea and floral patterns appear in a result. Stitches frame the contour. Only three colors of Anchor threads are used on the canvas of 18 counts of Aida Zweigart in this work.
You can arrange the work as a panel and as a table topper - our embroidery women as always could choose. ;)

The idea
It started with adult coloring books. This simple activity has been reopened. It turned out that it is the best help in the solution of an important problem, which almost every adult confronts - struggling with stress. As you know, you can deal with stress in different ways. Creativity is not only one of the most valuable, but also one of the most effective ways. Checked!
One of the first adult colorings were performed in Zen art style, which itself involves a kind of creative meditation. RIOLIS decided to follow the exact direction. The bases of the designs were formed by Ekaterina Arkhipova who made her sketches in Zen art style.
RIOLIS offers a new version of anti-stress work. Embroiderers try to apply their skills in a new direction, and those who are accustomed to the traditional coloring, can try to discover new sides and highlight sketches with stitches.
Realization
Needlework kits Embroidery therapy give you not only the freedom of creativity, but also the opportunity to choose a degree of freedom itself.
Beginners among needlewomen or those who want to fully relax with embroidery will like the ability to make the work in strict accordance with the cover. The kits will suit experienced needlewomen.
The needlework kit contains
For needlewomen new series schemes seem a little bit unusual, as traditionally they help to make the work in accordance with the picture shown on the cover. Notational conventions look unusual and refer to the encyclopedia of stitches, also placed in the booklet. If you decide to bring your own ideas, the lines marked on the canvas will help you. They will serve as a reference point in your work.
The most interesting thing is that regardless of whether you are embroidering according to the scheme or not, the work will turn out unique! While preparing kits for release, we have embroidered it several times, and we can say that it is impossible to practically make the same picture two times.
The needlework kit has as usually all the necessary materials to make a picture as it is on the cover: wool/acrylic yarn Safil, even weaven fabric manufactured in Europe with printed pattern and a suitable needle. In order to create your own version of the designs use beads, rhinestones, buttons and threads from the remnants of other RIOLIS kits!
Enjoy your creativity! 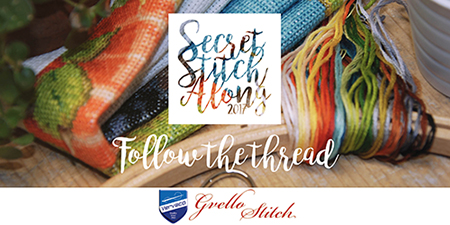 What is the Secret Stitch Along 2017 and why participate?

You can purchase Secret Stitch Along 2017 here.